Last March, I was one of the 23 selected students to participate in the Daniel Inouye Kakehashi Scholars Program. It was such an unforgettable experience, and even until this day, I feel incredibly lucky for the opportunity. One of the best things about the Kakehashi project was meeting and becoming friends with the students from Japan. 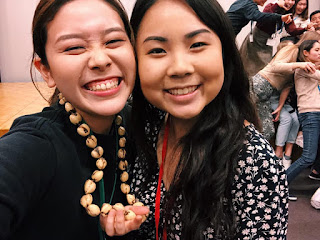 Our last photo together at Fukuoka Jo Gakuin University.

During my time in Fukuoka, I bonded with a few of the girls. Fumika Sato, a senior at Fukuoka Jo Gakuin University was one of the girls I became close friends with. I forget how we got into this specific conversation, but Fumika mentioned that her boyfriend is from Australia. I later told her that I had planned to study in Brisbane, Australia the following year at Griffith University. Coincidentally, she planned to move to Australia on a working holiday visa around the same time. 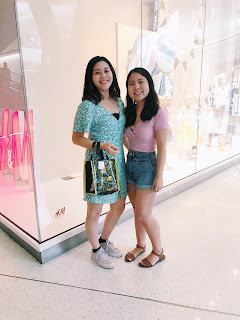 Our reunion at the Westfield Garden City mall.

Ever since I returned from Japan, Fumika and I remained in touch. Occasionally, we updated each other about our arrival dates in Brisbane and made plans to reunite. As we all know, the pandemic changed everything. I was confident that I would be sent home because of the uncertainty of available flights and my overall safety. However, I was given the choice to stay and I do not regret my decision. 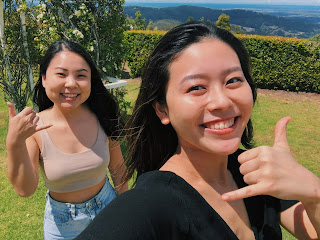 About a week before my departure, Fumika and I finally were able to reunite. It was difficult to plan a day and location because Fumika lived in the countryside, while I lived on campus (which is closer to Brisbane City). We were able to meet up twice before I left. I know it sounds sad because it was a brief amount of time. However, due to the unusual circumstances, I am incredibly grateful we spent those two days together. This experience showed me the best part of being abroad is not only creating new friendships, but it is also the reunion, especially if it is on a completely different continent!

Email ThisBlogThis!Share to TwitterShare to FacebookShare to Pinterest
Labels: australia

Darkness and the Galapagos 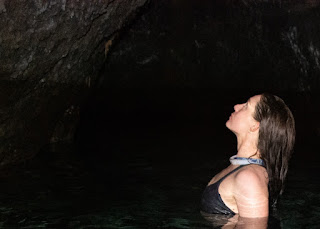 Throughout the Galapagos Island Archipelago, there are volcanic tunnels that have solidified into subterranean pathways. Peaceful and cool, they host a darkness that many people would fear. A lack of light that can only be really experienced underground, the hollow and craggy pathway lit only by our headlamps feels like the beginning to a horror movie. But like anything, if you enter a place with fear it will present you with something to be afraid of. We are quiet, not because we have to be, but because something about the tunnel feels holy. As if it is a cathedral to the secrets of the inner workings of the earth. It is surprisingly peaceful. The darkness and the sound of our footsteps echoing. We decide to turn out the lights and sit in silence. I decide to lay on the ground. In the darkness I feel more connected to the earth than I ever had. For a profound 5 minutes, I feel inexplicable peace. We then turn the lights on, but no one speaks for a few moments. As we explore the caves more, talking about volcanism and geology, there is a deep sense of content. As if our heartbeats have aligned to the movements of the earth’s core. I knew then, I would never feel scared of being underground again.

Floating Down the Amazon 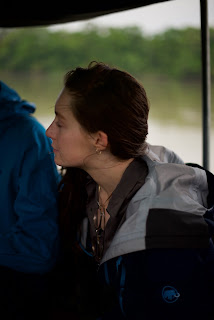 Miles and miles from any town or city, branches of the Amazon river basin wind through untouched rain forests. The sunlight here beams through the leaves of a thousand different plant species, and the sounds from the forest are not dominated by a single group of voices. There is balance here, no artificial mechanism has unbalanced the natural order. Capybara wade at the river’s edge, tarantulas hide beneath the wide leaves, and flocks of brightly colored birds dive across the water’s surface. In the early morning the sky is grey, and the long canoe cuts through the water as a soft rain falls. We count the numbers and varieties of birds as the hunt for food before the heat of the day arrives. After any hour we jump into the cold river water and let the current take us back to the research station downstream. The current is strong but not dangerous. I lay on my back and watch the rain forest pass by. We all hope we will be visited by a pod of pink river dolphins, but we know how rare an encounter is. Despite the cold rain, we laugh and attempt to swim against the current. We don’t want the float to end any sooner than it has to. You cannot see the bottom of the river, the water is murky. But you don’t fear what lies beneath. There is a sense of belonging, that maybe can only be felt in the depths of a protected rainforest. As if the creatures below and above you feel that we do not intend to harm them. And it is that peace of mind, that the sun rises and the day begins.

Life in The Paramo 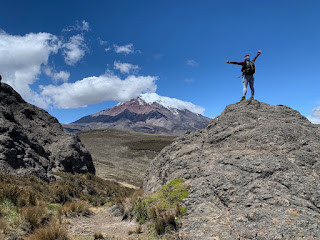 Thousands of feet above sea level, the Ecuadorian Paramo is an Andean environment, where only the strongest survive. Trees and plants must huddle together for warmth, and organisms must adapt to survive high levels of UV, arctic temperatures, and low level of nutrients in the soil. If you venture out into the harsh terrain, you must brace yourself for the same conditions. Covered from head to foot in order to evade the cold wind, the snow and rain, and the intense sunlight, you feel like I you have stepped onto another planet. But there is an unparalleled beauty to this desolate land. Volcanoes that stand as giants against the brilliant blue sky, seem to be pulled from the dreams of a fantasy painter. The wind is so strong you are unsure if you won’t be picked up and be blown across the face of the gold touched valleys. The feeling of open space is one that not many places on the planet still possess. You can stand at the base of the mountains and watch the landscape spread out for miles and miles. Your breath is short, perhaps because the air is so thin, or maybe because you have glimpsed a remnant of the majesty the world once held before humankind walked the planet.

I had seen youtube videos about how close the shipboard community was. I had not imagined how hard this goodbye would be. As the days counted down towards our arrival to San Diego I tried to enjoy every last moment. From the swim in the pool to the last movie night in my friends room. We stayed up all night prior to arriving in California. We played uno, started writing raps, and just enjoyed each others company. We created plans for a SAS reunion and had to say goodbye for now. 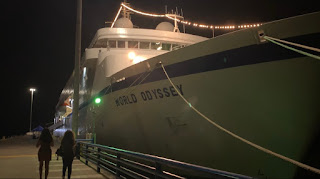 The last time returning to the ship 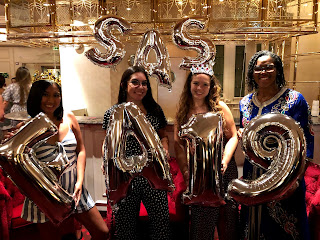 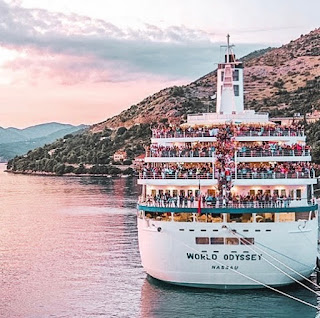 Email ThisBlogThis!Share to TwitterShare to FacebookShare to Pinterest
Labels: Semester at Sea, Worldwide

Studying abroad is such an amazing experience and you will not want to forget a single moment of it. To help me remember all of the amazing adventures I experienced as a part of Semester at Sea’s Fall 2019 voyage I kept a journal. After each day I would write down how my day was. I would write down how I felt, what I did, what I saw, and what my overall thoughts were. I would keep any small items that I have collected while visiting all these different countries. For each country, I visited I would buy one postcard and keep some of the currency they used. I would keep maps, pictures, train tickets, bus tickets, and business cards. I would glue all these items to my journal and in a few years, I will be able to look back at my journal and remember just how amazing my study abroad experience was. 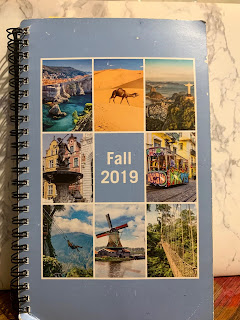 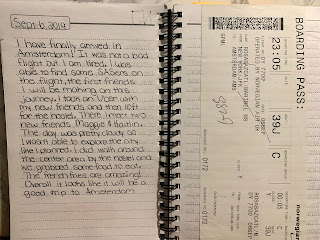 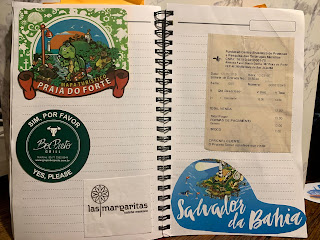 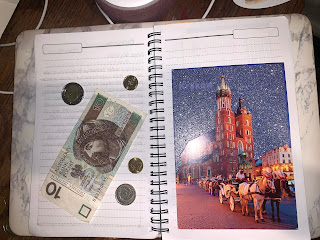 Email ThisBlogThis!Share to TwitterShare to FacebookShare to Pinterest
Labels: Semester at Sea

Transportation and Living in the Gold Coast

Aloha,
As stated in previous blogs, I lived in Surfers Paradise which is a city directly on the beach. This in my opinion is probably the best place live for someone who is temporarily living in the Gold Coast and is new. This is because the city has an assortment of options for all your living needs and has the best transportation. Plus the beach is always really close! This was the view of my apartment and the beach that is practically a 1 minute walk from the front desk. 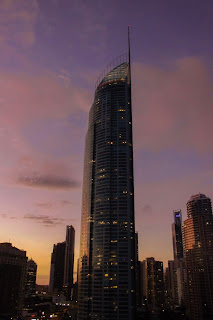 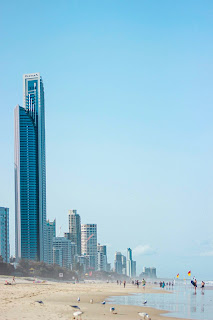 I am so fortunate to live in an amazing location and will always recommend people the same place I stayed. The apartment I lived in was called Surfers Century. At the time I lived there it was filled with other international students who also attended the same university as me, Griffith University. During my stay it was a lot of Americans for some reason all were from Pennsylvania. However, every semester it is filled with international students who all typically attend Griffith University.

Transportation was also something that made life so easy in Surfers Paradise and Gold Coast altogether. To go to school I would use the light rail system that travels up and down the coast. From my apartment to University it would take about 30 minutes to get to class. What made this system so simple was their paying methods. I got a gocard which is what they called it and this card worked pretty much like a debit card for public transportation. You would use this card to tap on every time you got on a bus, light rail, train or any public transportation provided by the state. And all you had to do was transfer money onto the card every time your balance got low. What I would do was put 50$ on at a time which would typically last a month or so. However, what I really loved about their public transportation was the ability to bring your surfboard. In Hawaii, the bus is our only transportation and surfboards are not allowed. In the Gold Coast, you were allowed to bring surfboards and but it gets better. It the light rail train system there were even board holders inside the train. This allowed you to lock your board up safely while you road to where ever you were going. The transportation was amazing and I was so lucky to have a system like this to facilitate such a great experience.
Posted by Kalen Halvorsen at 4:02 PM 1 comment:

Get our new blog posts via email!

About our HPU Students Abroad